Storyline:  Scientists are in the Antarctic doing tests and studies when they are interrupted by a mad Norwegian and stumble upon a frozen spacecraft.  What they did not know is the alien creature still lives inside the ship in a frozen state. 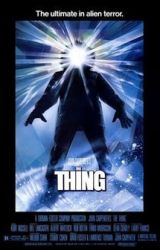 Review (Spoils): First off this is a remake of The Thing from Another World and it is way better. John Carpenter over did himself with over the top special effects and the storyline flows great together where the gaps were missing in the original. We have prime acting from Kurt Russell and the rest of the cast as they battle a space changing beast which brings physical and emotional conflict within the group of scientists.The film has you guessing through it who is the effected by the alien or who is the human. Between madness it is hard to tell between the two.

The movie has over the top gore; we have malformed dogs, strange blobs, gooey creatures and bodies that change to the reaction of the creature itself. This is not a date movie but it is one of the best horror films out there for special effects.

Rating: I might get nailed to the horror cross for saying this but this is John Carpenter’s best, sorry Michael Myers but this one has you beat. But I still love you!