Storyline:  Former summer camp caretaker named Cropsy gets burnt very badly from a prank played by fellow campers. Years later he comes back with his hedge clippers for revenge. 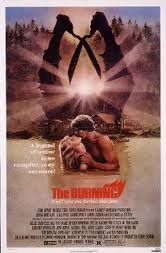 Review (Spoils): Cropsy is one badly burnt man and one mean MF. This film has over the top gore and Tom Savini did an amazing job on the special effect.This movie flows along the vein of Friday the 13th but it is not a rip off to be honest it holds its own. We have some of the nastiest kills and this has been censored many times over. I did track down a copy of this film and it is pretty graphic but I think there is a rougher one out there.

The film does have its B type of acting from the leads Todd (Brian Matthew) and sweet blonde Michelle (Leah Ayres) but remember the whole point of this film is to shock. The raft scene alone is worth tracking this film down.  Watch your fingers!!!

Rating:  I love this film and it is a classic 80s horror film. If you can track a copy of this, enjoy the murderous Cropsy and watch for George Costanza (Jason Alexander) back in his younger days. Don’t forget your hedge clippers…