Storyline:  Lonely and strange May Dove Canady had no friends and she left insecure due to her lazy eye. Her mother bought her a goth like that doll that she left in a glass case that was her best friend all her life.  She wants to connect and be part of society. 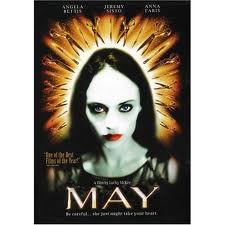 Review (Spoils): May (Angela Bettis) just wants to fit in and be normal. Have friends and fall in love but unfortunately she has some social issues and she is trying little too hard.From going to work every day at the animal hospital and sitting in her little apartment with her doll she slowly loses her mind. She falls in love with Adam Stubbs (Jeremy Sisto) as she loves his hands but ends up over doing it with her need of love. She tries to lean on the lesbian side with her friend Polly (Anna Faris) but yet again she is very needy.May just cannot find love and her true best friend and when her doll friend breaks so does May’s mind to create a new best friend and lover.

I believe Lucky McKee named it with this film. The people selected all played the parts perfectly and Angela Bettis stole the show with her role as May. She is the modern day Carrie minus the weird abilities.Both main characters Angela Bettis and Jeremy Sisto made this strange film believable and later on became known in other horror films. Bring on the symbolism and beers and enjoy this film as it is one of my favourites.

Rating:  Honestly I cannot say enough about this film. I have seen it a number of times and love it. Angela Bettis is awkward but in some strange way kind of cute and her acting is amazing in this one.We have Jeremy Sisto playing the main guy that gets a little freaked out by May and he has his reasons. Plus we have hot babes Anna Faris, Nora Zehetner and Roxanne Day (bring on the goth babes) what is there not to love? This movie is great …no wait strange and awesome! Bring out the beers and think of all the strange women you have met in your past and freak the crap out of yourself. Oh and watch for the ending.