Storyline:   A meteor falls from the sky carrying a slime life form that covers and eats everything in its path. 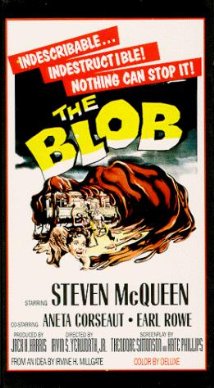 Review (Spoils):  Crack out the poodle’s skirts, necking at the drive-in movies and racing to be the tough guy here comes the blob! We have Steve Andrews (Steve Mc Queen) who pretends to be a tough teen and mr.cool (which does not work at all) and his too nice to be nice clean cut girl Jane (Aneta Coreaut) while parked come across a falling star which in truth is a alien life form attached to the falling rock. Some old fart picks at it with a stick and it attaches itself to his arm and it works its way into town that way.  Bit by bit the blob eats and grows until the kids get involved in it and the cops think they are nuts (wow another original storyline here!) and more people die and oh wait how are going to kill this thing? In the end they find out if they freeze it, it becomes a still life form.  Believe it or they helicopter the blob to the arctic. Wow talk about having power!

Ok as a storyline it is ok once you get past the bubblegum 50s theme and the graphics are actually pretty entertaining. Unfortunately the cast is so painful to watch it hurts the film.

Rating:  The blob is a classic from outer space monster movie.  But the cast is so cheesy that it sucks the film dry. Thank  god the blob itself was worth watching.