Storyline:  A family moves to an ancient hotel with a haunting presence over takes the father who is a writer. 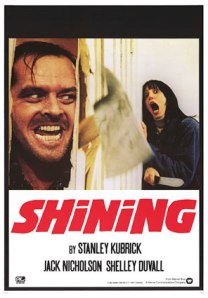 Review: Writer Jack Torrance (Jack Nicholson) and his family become care takers for a hotel over the long winter. Slowly haunting presences start to happen such as the son Danny (Danny Lloyd) acting very weird, shaking, talking in little voices, seeing blood flowing in hallways, seeing ghost twin girls and the father is slowly losing his mind. Through all this madness Jack’s annoying wife Wendy (Shelley Duvall) tries to hold it all together.

This film is a classic when it comes to haunting films or in horror films in general. There is really nothing wrong with this film at all except that Shelley Duvall is enough to drive any man or family mad but outside of her this picture is a masterpiece. Sure the whole story of being “The Shining” can be a bit confusing and out stretched but then again it is Stephen King. The film is glorious in scenery, acting and some of the writing is eerie and classic such as “Here comes Johnny”, “You’ve had your whole FUCKING LIFE to think things over, what good’s a few minutes more gonna do you now?” and of course “Redrum”.

Rating: The only really fault of this film is it is over played and because of that it rarely hits my much watch during the Halloween season. Classic film but watch out for the wanna be horror fans when you talk about this gem.