Storyline: Andy is all grown up and Chucky still wants him dead. 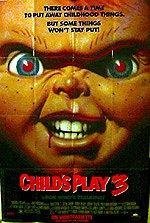 Review (Spoils): Andy (Justin Whalin) is all grown up and is now in military school. At the same time the toy company decides to release the Good Guys toy line. So they cheap out and use old materials of the past dolls and lord be hold Chucky is back. Chucky goes on a killer rampage again to kill anyone who gets in his way to Andy and also he tries to possess a new young boy now owns the new doll.

This series is really drying out at this point. Kill Andy already and move on. Garbage trucks, stabbings, heart attacks, throat slits, grenades, gun shots and the fan death.

Rating:  Too be honest this series kind of died for me after the first film. Not a Chucky fan and the storyline are forever long. Luckily not long in the series they catch on and change the direction.