Storyline: Some young people get lost when snowmobiling and end up at the asylum of the cannibal killers. 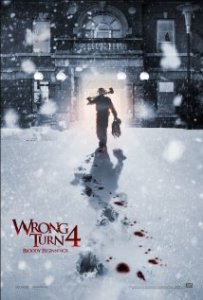 Review (Spoils): The cannibals over take the sanatorium in which they are being held. They eat and kill everyone including inmates and now live in the building. Its winter time and some babes and the odd boyfriend head out snowmobiling on their winter break but end up getting lost. They end up at the sanatorium for shelter and before you know it they are banging, drinking, dancing and watching old asylum films for fun. Well not for long as the cannibals start to eat and kill of each one ..one by one.

We have lots of red blood, a mean drill that is a gorger, barb wire lots of it, beheadings, some lesbian love scenes, babes, some hand chopping, some skinning and a stupid death under a ski-do.

Rating: What do I like better then red blood on snow in a film, one that is filled with babes. Sure the film is kind of lame (like the decisions not to kill them all when they have them captured) but the film is worth it just for Jennifer Pudavic, Ali Tatryn and Samantha Kendrick, hell they are all hot. Sure this film is not as decent as The Descent but you get the idea. What saved the film was the over the top blood and the hotties. Grab some beers, some Kleenex and enjoy this bloody mess of a film (don’t forget the corn chips).