Storyline: The story of the power of the madman monk Rasputin 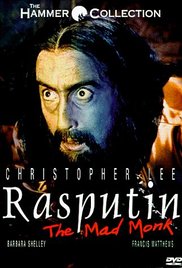 Review (Spoils): Grigori Rasputin (Christopher Lee) has the mental power to bend people to his will. When he uses his power to heal a woman and starts to gain the reputation from the villagers as a good guy eh starts to show his true colours. Rasputin uses his mind to brain wash women to become his slaves and bid his evil doing. To the point of their breaking point and their weakness.

Much like other Hammer Films this one is made up with beautiful gothic scenery and clothing. We have Christopher Lee at one of his best make-up setup as the mad monk. His acting stands out in this film and Rasputin should be a legendary character of his much like Dracula. The film tells the story of the drunken mad monk and how he uses his mind to control people to do his bidding so that he can live happily in wealth. The two damsels in this Hammer film are legendary scream queens Suzan Farmer and Barbara Shelley, we do not have the bosoms out like most Hammer films but at the same time we do have great acting as Shelley places the poor soul that the monk torments.

Rating:  I will be honest I did not find it the strongest Hammer Film as it is lacking frights but the story and the acting alone is worth watching. Some of the story is lacking on how he gets the powers and the ending just kind of just ended but that is not much different other Hammer Films. I think we needed more cleavage and less mullets.