Storyline: A young woman goes to visit the mother of a past fiancé and becomes overwhelmed with her need. 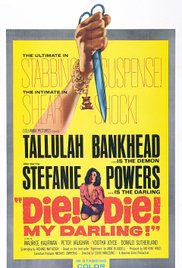 Review (Spoils): Patricia Carroll (Stefanie Powers) arrives in London with her new fiancé but before she can move on she promised that she would finally meet her old fiancés Steven’s mother (Tallulah Bankhead) (he died and Patricia has moved on). She travels out of town to an old beaten down house to finally meet the woman. She is old, strong opinionated, strangely religious and obsessed with her son. As Patricia tries to survive the visit she learns that she is not leaving anytime soon and has to keep lying to survive her visit. We quickly learn that mother is not all that she portrays to be.

Die! Die! My Darling is something a little different for a Hammer Film. This film is based mostly in an old house and a broken down mind. We have the very gorgeous Stefanie Powers playing the lead victim and lady who is being held against her will and captured because a mother is insane over the loss of her son. As the truth of Patricia starts to come to light the more nuts the mother is driven. The characters and acting is extremely well done and the even the storylines between the main plot is an interesting twist. Such as the hired staff that work for the mother and what’s in it for them. The religious over tones keeps the film entertaining and there are even some funny scenes but at the same time the mood can be very dark and icky at the same time.  Some bright red blood, knives, gun shots, a green dead body, a couple prayers, lots of “poor Steven”, long legs and sexiness. This film has it all.

Rating: This title has been thrown around for long time from music from the Misfits right to the creepy and classic tunes of Alice Cooper and Steven. This movie is a classic! This is the perfect ex-mother in-law has lost her mind film. Tallulah Bankhead is one scary mom and very strong headed and when she finally snaps the fun begins. This is a classic horror film that everyone should checkout very entertaining.