Storyline: Two people come across a box of VHS tapes when they were investigating a missing student. The film is a collection of the watched tapes. 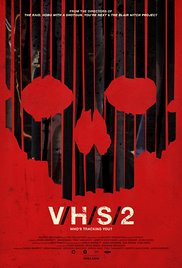 Review (Spoils): This time in the series, we have two people who are videotaping their undercover investigation of a missing student. During the search, they comes across a box of VHS tapes which they start to watch. While going through the series of the tapes (4 short tales of horror) strange things start to happen to them also. Spoiler alert about to happen!

The first tape viewed is called “Phase 1 Clinic Trials” this one of the weaker tales which focuses around the super natural and some jumping parts of a fat naked man and a little girl appearing and disappearing and haunting a man. The graphic are actual good but when it comes to haunting it is the same ol’ story. We have a quick topless shot in this one.

The second tape “A Ride in the Park” is a more interesting one as it involves zombies and a biker. A zombie bites the biker and then we start to see through the video eyes of a zombie attacking. Lots of blood and gore and a fun new take of a zombie tale.

The third and more fun tape of them, “Safe Haven” is a wild gorefest of a cult that is being documented and all Hell breaks loose…literally. Gore galore, I could rate this film alone on this one! The gore blew my mind and I could not stop ginning… bring on the devil horns and blood.

The main last tape called “Slumber Party Alien Abduction” is a weaker one I find, as it was too shaky to know really, what was happening. It had a Stranger Things feel but at the same time, it was all too fast and confusing.

The ending is the conclusion of the two watching the tapes and slowly being haunted and tormented. More of side note of the whole film really.

Rating: Once again, this series blew me away and kept me entertained. The film was fun and was actually damn gory. The gunshots to the head was over the top in a few of the short stories that helped me easy rate this film for a few beers higher. I can actually say even with the odd weaker tale the good ones were well worth the whole watch! Check out this series if you are a gorehound!