Storyline: A gentlemen’s club is talked into resurrecting Dracula in trade for the ultimate sin. 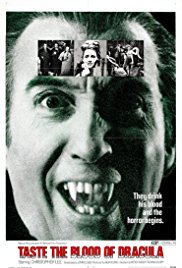 Review (Spoils): Three middle-aged men who live life to the fullest are talked into selling their soul and some money to resurrect the prince of darkness himself. During the ceremony, the men back out but the young man who talked them into continues and Dracula is raised from the undead. Dracula takes it upon himself to kill each one of the men off one and one and ruin their lives. During all this, one of men Hargood’s daughter is under a spell of Dracula and is taken under his wing causing torment to the village.

Christopher Lee is back as Dracula yet again and he is outstanding. This time he does have some dialogue but nothing huge. We have the cape, red eyes, bright red blood, some biting, some glowing crosses; some great devil worship alters and because it is a Hammer Film some flowing bosoms. The storyline is actually decent and different then the other tales and we have the lovely Linda Hayden and Isla Blair gracing the screen. The only issue with the film is ending as it ended quickly without a long-winded battle that Dracula deserves.

Rating: I personally enjoyed this film even though it did have some plot flaws. We have some enjoyable views of the women that are overtaken by the prince of darkness and I honestly think Christopher Lee was the greatest Dracula. Someday I would love to sit and watch them all in order to get the full effect of the Hammer Dracula films.