Storyline:  A young girl is taken to be modeled as a killer to help revenge the death of a wife and child. 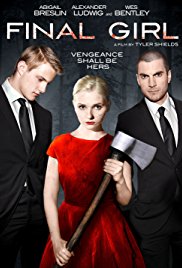 Review (Spoils): Young Veronica (Abigail Breslin) is taken and trained to be a killer so that she can help avenge a death of William’s (Wes Bentley) family. We learn that there is a group of young gentlemen that have some serious mental issues that gather every once in awhile and hunt down young girls in the woods. So, William setups up Veronica to stop them as becoming the final girl.

I have read some bad reviews of this film but to be honest I enjoyed it and liked that it was not heavy on development and plot. Yes, the plot is very simple but I like the unknown about it and it just ended which is great. This film is what it is, young boys trying to hunt down a girl that they do not know if a trained killer herself. The boys each have their personality and small background that is not complicated in story. Perfect!

The film is lacking in gore and blood which okay that could have been better but overall the film is made of the following: woods, baseball bats, axes, drugs, hanging and a nice rock smash. The film can be pretty dark or over shadowed during the kills but it is entertaining non- the less.

Rating:  At first, I was not sure if I enjoyed Abigail Breslin as to me she does not look great as a yellowed haired blond. But as we made our way to the woods the character kind of grew on me. The film does have a Funny Games feel to it but I do enjoy my woman revenge films so this one suckered me in.  I personally hope they stay away from a sequel and just the film as it is.