Tag Archives: Children of the Corn

Storyline:  All the kids in a small town become sick and start to overtake old names of deceased children.

Review (Spoils):  In a small town a number of the children become feverish and sick. The very next day they start to act more violent and start to take over personalities of deceased children of the past. The children start to kill off the adults of the town. When Grace (Naomi Watts ) returned to the small town she finds out that her young sister is dragged into the madness also.

We have lot of blood and gore in this entry as we have pitchforks, lots of scythes, a nasty barbed wire scene and some cut off fingers. The children are nasty in this one!!! Hell why not as they all do it for the One Who Walks Behind the Rows. We have some great acting from both Naomi Watts and Karen Black butthe fault of the film is the painful number of dream sequences that are thrown at the audience.

Rating:  To be honest this film was not bad as the series was becoming painful with repeativeness but this one is a little different. They don’t really mention the cult at all as it is just assumed as you know you’re watching a Children of the Corn film. The gore is nice and some of the kills are entertaining so Greg Spence was a breath of fresh air for the series.

Storyline: Two brothers from the cult located in Gatlin go to a couple in Chicago. 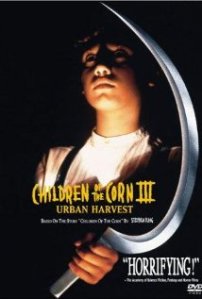 Review (Spoils): Two young boys kill their father so they are placed in custody of foster parents located in Chicago. The youngest and most disturbed of the two brothers starts to plant corn in the city to bring forth He Who Walks Behind the Rows. This starts a small cult in the city for the children and the whole idea of Gatlin is now in Chicago.

Bring out the blood in this one; we have teenagers and kids dying in splattering ways.  Think of the Omen meets a corn field. The acting is average at best but man they delivered the bloody goods on this entry. Ripped off arms, sewn shut body parts, some nasty burns, lots of insects, spickets, faces being ripped off, scythes of course and the classic spine revealing decapitation.

Rating:  The series is still lacking something but in all honesty this as good as it gets for the series (except the first one of course). Grab some cold ones and sit down and enjoy a street version of the Children of the Corn., it’s a bloody mess!

Storyline:  A journalist and her son travel to Gaitlin to follow a story of murdered parents and children in the corn fields.

Review (Spoils): John Garrett and his son Danny head to Gatlin as the children from the small town have been moved to the neighbouring town called Hemmingford. On their journey to Gatlin they come across an orphan named Micah (Ryan Bollman), who just happens to be possessed by He Who Walks Behind the Rows. Danny and Micah becomes fast friend and they influence each other. Oh and somewhere in there Danny starts to love a Lucy (Christie Clark) character.

The story is full of flaws and kind of runs off the tracks from the first film. We have classy deaths like a house falling on a woman, killer corn with wicked godlike powers, a child that loves to stare (Micah) and some junk about how the legend is tied to ruins on stones. The story is just all over the place on this entry. It’s too bad as the original was a classic.

Rating:  This film is really a waste and the series goes to the shits from here on in. I guess you could drink to the word “corn” and get hammered but is it worth the attempt of watching this film?

Storyline:  A cult ran by a preacher boy named Isaac has children killing all the adults. The small town Gatlin will never be the same.

Review (Spoils):  A young couple (Peter Horton, Linda Hamilton) come across a person who throat was slashed before their car hit them. They go to the nearest town to report it and find out that there are no adults in this town and the children are acting strange. Soon they learn that Isaac (John Franklin) has the children converted to believe that to become an adult is a sin and they need to be sacrificed to an evil god that lives in the cornfields called “He who Walks Behind the Rows”.

We have nasty machetes, sickles, lots of bloodletting and how about some on a cross made of corn stalks? This movie can be a little slow paced but overall it is not bad. Courtney Gains does a great job playing Malachai, giving the film the creepiness and being the pawn for Isaac.

Rating:  Not a terrible movie and the better one of the whole series (it’s a large series).  This film brings me back to my childhood and the book is very well written.  This is one of the better films of the Stephen King collection. So let’s drink and have a toast to the “He who Walks Behind the Rows”.