Storyline: After sometime a new water park opens and the piranhas are back. 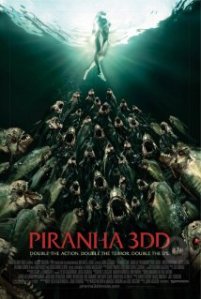 Review (Spoils): The series continues where it left off which flashbacks, the basic storyline is a dirty uncle (David Koechner )wants to make money so he opens an adult water theme park even though his niece (Danielle Panabaker) who is half owner id against it. During this time some rednecks disturb the eggs of some piranhas when moving the body of a dead floating cow. The nasty species makes its way to the park where the T&A becomes a bloodbath.

We have the very cute Danielle Panabaker trapped in this silly continuation of the series. We have lots of blood in the water, exploding cows, lots of T&A, some lame storyline of nerd boy loves the girl but she likes the dirty cop story, a penis scene that was dumb and of course the Hoff. There is lots of floating hands (not sure why piranhas don’t eat these…must have been a box deal on floating hands), some chuckles and some stupidity such as the machine gun in the leg. The highlight of the film is the T&A, Danielle Panabaker and David Hasselhoff. The piranhas were so fake it was impossible to even take it a bit serious, more fake then the bimbos in the film.

Rating: This film failed but at the same time was still watchable. The last one was not horrible but this one should be the nail to the coffin of the series. There is cheesy fun but this kind of was leaning too much on the dumb side, much like a Troma film but unfortunate not one.

Rating:  Not the greatest film and yes it was a bit too much on the teenage party stuff (sigh I’m getting old). But for a fun film with some friends this is not too bad and it is better than the original to be honest.  The only real disappointment of the film was no Elisabeth Shue in a bikini, shame on you Alexandre Aja.