Storyline:  Dr. Herbert West is back and this time he wants to create the perfect woman from dead tissue. 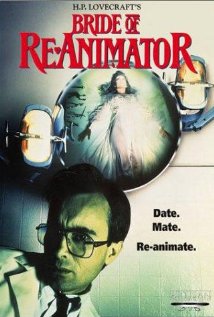 Review (Spoils): Dr. Herbert West (Jeffery Combs) and Dr.Cain (Bruce Abbott) are working on creating life from dead tissue by using tissue from wounded soldiers. Lt. Leslie Chapham (Claude Earl Jones) figures out something is up when body parts start going missing. During which Dr.West gets rid of the snoopy Chapman and brings him back with the serum. This leads to Gloria’s death, they use her head and the heart of Meg (Kathleen Kinmont) and other parts of women to make the new type of woman that represents his past girlfriend.

This is a great sequel to awesome film. Lots of gore and blood and fun just like the first film. Once again Jeffery Combs does an awesome job as the mad doctor and even are even graced by the beautiful Fabiana Udenio. This film did remind me of the classic Frankenhooker but yet better.

Rating:  Another Re-animator classic film for the series. Not as great as the first film but I love the way the horror and the comedy mend together to make a classic series.  Drink up for the bride!