Storyline:  Some people discover an underwater society of smugglers that never age and live in a long forgotten city buried underwater. 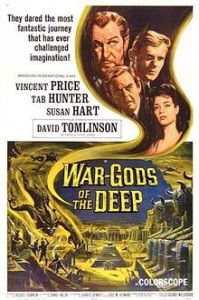 Review:  A busty women (Susan Hart) gets kidnapped which leads to the findings of seaweed and water travels that lead to hidden tunnels in an old castle.  Two men and a chicken go on the hunt for the woman and who actually kidnapped her. This leads to whirlpools, gill-men, a society of smuggler that never age lead by the Captain (Vincent Price), active underwater volcano and some seriously huge helmets that have marlins engraved on them.

Rating: This film was yet another Poe story done with Vincent Price. Not much more to say here as the storyline was not meaty by any means but the scenery was amazing. Some fish die and we have little blood in the water. The costumes of the gill-men were funny and the amount of bust shots of Susan Hart also added to the humour. More sci-fi then horror for this one.