Storyline:  Trapped in the woods in West Virginia a group of young people get hunted down by cannibalistic men who are disfigured due to in-breeding. 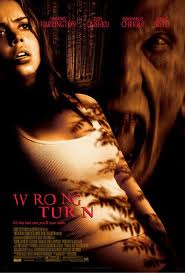 Review (Spoils): This film does not have much storyline so I will narrow it down. We have a couple car wrecks and then young people meeting and than those young people trying to survive the woods while being hunted down by 3 mountain men.  We don’t need much storyline to make this film fun.  We have like able character such as Jeremy Sisto, we have hot chicks such as Eliza Dushku, Emmanuelle Chriqui and Lindy Booth.  We go lots of blood gore and spears and arrows, some great makeup for the disfigured men that hunt through the woods looking new victims and food.

Rating:  The movie is simple it has rednecks and hot girls that are not dressed for the woods. Seems simple? Yes the movie is that simple. Not great but not overly horrible but it is not The Hills Have Eyes. (the original not that awful remake)