Storyline:  During a families wedding anniversary party a group of men in masks start to terrorize the family. 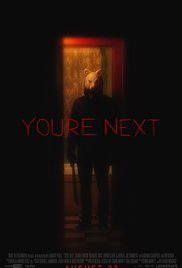 Review (Spoils):  A man and his wife have invited their siblings and their loved ones to come to an old mansion that help celebrate their wedding anniversary. What everyone does not know is the neighbors next door have already been slaughtered by someone in a mask that leaves messages in blood saying You’re Next. Through this we gain some character development, some conflict between the sons, some background on the family and money and of course a few killers roaming around in animal masks that are not afraid by any means on getting their hands bloody.

We have a topless scene in the first 2 min, lots of red blood, nasty axes, crossbows, glass cuts, some serious throat cuts, nails in the foot, some head smashes and a actual cool plot and storyline. We have the beautiful Sharni Vinson as our scream queen and the actual people used in this film are normal not you type Hollywood crap setup.

Rating: This film was sooo much fun! It was a total bloody mess and I was entertained actual through the whole damn thing. It’s been awhile since I enjoyed a horror film this much and it was over top gory. Think The Strangers meets the goriest thing and this sums this film up!

Storyline: A group of men break into a house and find a strange collection of VHS tapes that have collections of people being killed in unbelievable ways.

Review (Spoils): We have a group of men which break into a house and find a dead man sitting in a chair while the search for a tape in which they were to retrieve. During their search for the tape they come across a number of tapes that creepy or unreal footage on them. Each video tells a tale of something of the unknown.

“Amateur Night” The first tape is a tale of a group of three men who are out to shake the town the up. The groups of guys get drunk and do some drugs and end up bring back two girls back to the hotel room that they are staying in. One girl Lisa (Jas Sams) passes out as the creepy girl Lily (Hannah Fierman) is attracted to the odd ball boy of the group. The other two men force themselves on her to learn that Lily is not all she claims to be. It leads to a bloody mess.

“Second Honeymoon” A couple head to the Wild West to spend some time together. The woman of the couple Stephanie (Sophia Takal) gets her fortune told and learns that she is told visited by a loved one. This leads to a strange woman asking for ride in the middle of the night which the boyfriend (Joe Swanberg) declines. The woman becomes an intruder that films them, steals money and rubs the toothbrush on the toilet. This one ends also in a bloody throat slitting mess.

“Tuesday the 17th” Four friends take a trip through the bush and find bodies lying about and tell tales of horror that haunts the woods. They started to be hunted down one by one by a killer that looks like a blur running through the woods.

“The Sick Thing that Happened to Emily when she Younger” This sequence is webcam conversation between Emily (Helen Rogers) and her dick boyfriend James about her apartment being haunted. We have ghostly like children, a nasty itchy rash, a fetus from the back of the neck and some a connection between the boyfriend and the haunting

“10/31/98” This is the weaker of the bunch as it deals with a group of men as they come across a strange cult in the attic of an old haunted house. The special effects are pretty well done on this one though but the storyline is weak.

Rating: This to me is a modern day Creepshow which is a good thing. I personally had no idea what the film was about as I try not to read reviews before viewing films. This was a surprise for me as I did not know this was a bunch of short stories and I dug the film quite a bit. The stories were entertaining enough for me, it had some babes in it and it kept me glued to the screen. All of them were interesting except for the last one which kind of dragged on a bit. Want something new grab some beers and check this film out.