Storyline: A man walks into a Vegas pawn shop with a statue of leprechaun with a medallion along his neck. The necklace gets removed releasing the monstrous leprechaun onto Vegas! 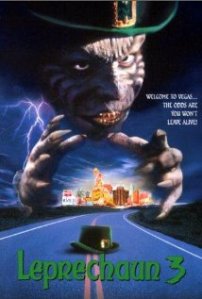 Review (Spoils): The leprechaun (Warwick Davis) is back and this time he in Vegas. He was trapped in a statue with a good luck medallion holding him but when this was removed the nasty little beast get released. During this a young couple run into each other and fall in love (it is Vegas) but the poor bastard looses everything so he heads to a pawnshop. During this he runs into the body of the guy that removed the medallion but he comes across a gold piece. This leads to a wish and a winning streak. But then there is a fight and he gets bitten by the leprechaun which leads to he slowly becoming one. The coin turns out to lead to curse and the leprechaun starts to kill people off as they start using the coin.

This film is whacked as it involves the classic leprechaun, a chainsaw, a robot, a man who is turning into a leprechaun, an exploding woman, some nasty bites and everyone is trying to sleep with Tammy (Lee Armstrong).

Rating: This is where the series like the Nightmare on Elm Street failed… too much comedy not enough blood and scares. When a series crossed the thin line of funny and never came back. If you’re looking for more dumb than scary then this up your alley.