Storyline:  A troubled clerk doubles as a detective is investigating strange going ons at the local mental sanitarium. 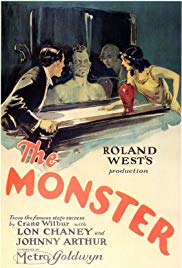 Review (Spoils): A madman named Dr. Ziska (Lon Chaney) gets rid of the staff at mental sanitarium and uses the patients as his new staff. The lunatics start to work at the place as Ziska collects bodies to experiment on. As the new detective walks around with the book of “How to be a Detective?” as he is trying to find missing people. As Ziska is abducting people for his experiments the detective gets on the case.

The story line borders on comedy and fun more than the actual horror. The scenery is amazing in this film and make up of Lon Chaney’s character is outstanding. The film itself can be pretty slow moving as the actors are limited as there only a few in the film to hold interest. Part of me thinks that the talent and make up of Chaney was wasted a bit in this film as it was the Wow factor of the film.

Rating:  Going to be honest this is one slow moving film with some small laughs, but the Chaney steals the film. The next interesting character is his henchman that helps him with the dropping mirror from the tree to cause cars to run off the road, so they can capture them. The film is fun silent with some scary make up but do not expect to be thrilled or scared. 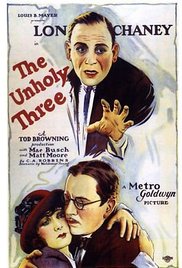 Review (Spoils): Three sideshow performers a ventriloquist named Echo (Lon Chaney), a small man named Tweedledee (Harry Earle) and a strong man named Hercules (Victor McLaglen) start a plan to make some money. Echo will pose as an old lady (who can use his voice to make birds talk) as Tweedledee poses as a baby and they rob people as they complain about the birds stop talking at home. Ties this in with a love triangle and this is the plot of the story.

Checking out this film I was not sure what exactly I was getting into but this film is a silent gem. Lon Chaney played all his parts perfectly as the leader of the crime gang and the old lady. The facial expressions of Lon Chaney is outstanding and he really is the man of make-up. The lead actress Mae Busch is also great as she plays the strong woman of the gang but she tied between the love triangle of once being used by Echo and then following love with one of the victims.

Rating: This film does not scream blood or guts as it is a silent film from the 20s but what we do have here is a classic in the horror film genre. Tod Browning  did something like this later on called Freaks it was more over the top this is more story based then shock based. Another Lon Chaney classic!

Storyline:  An armless knife thrower from a circus is a fake and turns to the life of crime. 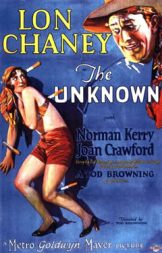 Review (Spoils): I ran across this film when I was searching for something new to watch but yet old. This short black and white film was quick surprise. We have a mixed up knife thrower from a circus named Alonzo (Lon Chaney )who is reaching fame for being one armed but the truth is he is a fake. Nanon (Joan Crawford) the daughter of the circus owner has stolen his heart but she is tied between Alonzo and Mirabar (Norman Kerry). Alonzo will do anything to win her.

This movie is very dark and it kept me glued to the screen for a silent film. Lon Chaney once again creates a character that is memorable and downright chilling. He truly is the Master of Horror.

Rating:  This is great movie if you do not mind silent films. Check this baby out and it has Lon Chaney and Joan Crawford so what are you waiting for!

Storyline: The Opera House of Paris is haunted by a mysterious phantom that falls in love with a singer named Christine (Mary Philbin). He grants her the greatest role and success if she will give it all up for him.

Review: This is my first silent film review. There was so many to choose from my collection to be my first but Lon Chaney is a legend in horror (plus Rebecca had never seen it before). The story is very easy to follow as it is a haunting love story of a phantom named Erik (Lon Chaney) who will do anything for the girl.

First off the sets in this movie are amazing and massive. The Opera Hall itself is a whole screen from roof to floor and the casting for fill in actors/actresses is huge. This film is amazing for its time when it comes to detail. Even the many levels of the catacombs beneath the stag are very detailed with water ways, dripping walls and even a large bedroom.  Unfortunately the copy I own has changes in color for certain areas in the dungeons ranging from blue/red/ green to black and white. Not sure Universal decided to do this on later copies but still it did not stop the beauty of the sets.

Now to the monster himself! Lon Chaney steals the show when it comes to acting in this one and the mystery behind his man like half mask leads to the revealing of one of the best make-up monster to date. The pale skin, fearful mouth of jagged teeth and those menacing bulging eyes. This is the best of the entire versions of this tale and thanks to Lon Chaney creating one of the most memorable monsters of horror.

Rating: Crack open the case for this one as it’s a classic and if you dislike silent films this still a must see. The gothic beauty of the sets alone is worth the watch. Thank God Lon Chaney passed some of his greatness to his son to continue the horror venture.