Storyline:  A snuff film of a cult of bikers that film a number of killings. 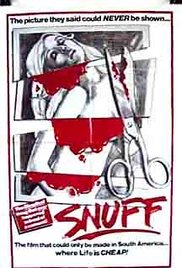 Review (Spoils): It took me a long while to get a hold of a copy of this film as it held a lot of controversy around it as one time the film was thought to be a real snuff film during its release.  After years of odd searching I finally found a copy and thought another film off my horror bucket list to check off. What I did find was an imported, raw knock of the Manson family massacres (Spoiler!!! yes they did do the pregnant woman thing in this film).

This film is all over the place and not sure why they did that way unless they thought this would trick the viewer that they were watching actual raw footage of a snuff film. We have a long boring period of the film being around a young woman and her rich boyfriend and the build of that relationship bond and then somewhere mid beginning it cuts into the murdering. We have biker chicks that kill and some very cheap special effects. Sure we have some bloody finger chopping and some intestine/other organs pulling and of course the finale scene which is something else if you can get over the bad acting and over dub. The last 10min is the best part of the whole film.

Rating: In the mood for a bad taste film and I mean bad as in not very good.We have some bad acting, terrible transfer and some not realistic special effects but if at least I can say I have seen it and own a copy.