Storyline: A group of young people go to a cabin in the woods and become sick from the water supply. 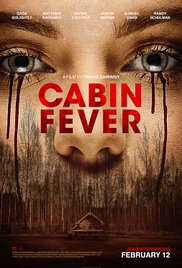 Review (Spoils): Remake time yet again in the world of horror. This time it is one of gems of the horror world Cabin Fever. The story does not stretch far from the original except the characters are a little more paper thin, the dialogue is vague and you actually can be annoyed at the beginning of the film with the characters. But it makes up some of this with the gore.

We have pretty much the same scenes as the original film (which gives a question why the remake) and the blood is not as good but there is plenty still. We have gory dogs, puking blood, the classic shave scene, unnecessary sex scenes (nice body Nadine Crocker), gun shots, rotting flesh, nasty bleeding, some stupid dropin characters that were not needed and the cute Gage Golightly.

Rating: This film is pretty much the same thing but not as funny and the characters are a bit more annoying. The film has the same amount of gore but the sex scenes are annoying and not needed and the characters that just dropin in the film make no sense. This hurts the film, if they would have just stuck with the blood and gore and Gage Golightly this film could have been rated higher.