Storyline: A mother and her son are shape changers that come to town to see out a virgin to feed upon. 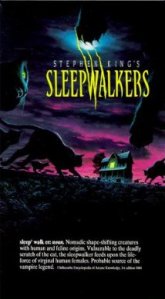 Review (Spoils): Charles Brady (Brian Krause) and his mother Mary (Alice Krige ) are very close and they move to a new small town. What people do not known is that they are supernatural creatures called sleepwalkers. They can change appearances and feed off the life force of young women. Charles has the eyes for a young Tanya (Madchen Amick ) and his mother is pressuring him to bring in her in for the feed. The problem is Tanya escaped!

We have cats, hand ripping, lots of slashes, some good life force sucking, lots of shape changing, finger biting and some mom and son cuddling time. This film is actually fun and it moves along and does not really get tied up in drama. The storyline is pretty straight forward and the connection between Charles and his mother is great. The special effects could be better but for its time it is decent enough.

Rating: There are a ton of Stephen King films out there and this is actually one of the better ones. The film is not amazing but it’s a fun flick with a few friends and beers. The mother and son duo is a nice touch which makes the film so fun to watch.