Storyline: A beautiful trapeze artist is marrying the ring leader of a circus for just the money and rest of the troop have their revenge. 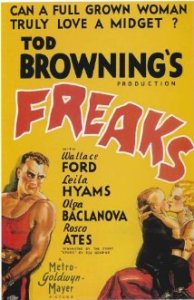 Review (Spoils): Cleopatra (Olga Baclanova) takes an interest in Hans but only because she found out about his inheritance. What Hans does not know is she is actually in love with another performer and playing him. So time passes the wedding happens she gets hammered and tells the other circus sideshow freaks what she truly thinks of him and them. This is found out and the freaks together band together to take her out.

This is one of those classic films that I get a sick feeling in my stomach even thinking about re-watching. It seems wrong on so many levels and at the same time the film is creepy, dark and very gloomy. This is what makes this film a horror classic. Tod Browning took from what he learns from Dracula and Frankenstein and creates something even more disturbing. The film reminds me a bit of The Unknown but at the same time it is different. The misshaped people that are displayed on the screen are not your typical make-up and special effects but actually real. This pulls at the emotions that what is being displayed is wrong and misplaced but also at the same time you feel for these people for being displayed this way. This film is sad, gloomy and feels wrong. That’s what makes this a horror film.

Rating: Not your typical horror film at all but a film of broken hearts, mistrust, mistreatment and darkness. This is what makes this film a classic and sits in the legends of not just horror film but film in general.

Storyline:  A noble refuses to kiss the kings hand so he kills him and surgically disfigures his son as revenge. The son travels on a freak show and does not know that he really is a noble. 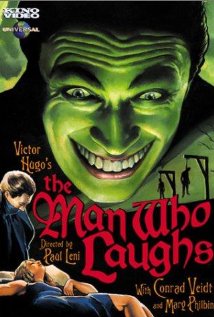 Review (Spoils):  The son of Lord Clancharlie Gwynplaine (Julius Molnar Jr., ) is punished for his father’s actions to the king. He gets sent to Dr. Hardquanonne who is known to disfigure children and kidnap them. Gwynplaine gets a permanent smile craved into his poor face and gets exiled into the cold winter where is founded by a man who runs a traveling freak show. Years pass and Gwynplaine (Conrad Veidt) travels with them as “The Man Who Laughs” and falls in love with a blind woman named Dea (Mary Philbin).  During their travels Duchess Josiana (Olga Baclanova) falls in love with his face of fake happiness during one of his shows. She tracks him down with her wild traits and entraps him in a love triangle.

Silent films are easy to review as it comes down to scenery and facial expressions that make the film.  This film has both! The scenery is very well done from the royal bedchambers to the costumes themselves.  The crazed jester Barkilphedro (Brandon Hurst) was awesome.  He was the perfect villain as you can see the madness right in his eyes as he laid his evil ideas and plans to the king about the child Gwynplaine.  He was truly way more frightening them the laughing man himself. The second most interesting character is the child actor Julius Molnar Jr. during his travels through the storm and the sheer innocence of him when rescues the baby from the dead mothers arms.  The film describes this perfectly on the screen without words.  The rest of the film is interesting such as the quite loosely enjoyable Duchess Josiana and the hidden face of Gwynplaine when he was older but I feel the true outstanding of the film is the younger moments of the film.

Rating:  This film was very interesting and it held my attention. The storyline was thick and did not contain any real holes unlike other plots for this era. Sure it’s a love story but at the same time it’s a story of tragedy as poor Gwynplaine gets punished for his own father’s actions. The film has an iron maiden which worth some gold stars also.