Storyline:  A separated woman and her two child stay at a haunted house that once was part of the sinister cult. 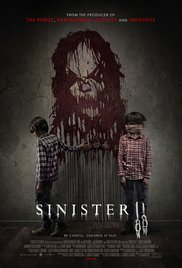 Review (Spoils): The beautiful Courtney is on the run with her two boys from her abusive husband. They shack up into one of the old haunted houses that was part once of the sinister cult. (See first film). Strange things start to happen to the young boys as one of them starts to see and talk the haunting children and starts to watch films created by them on killing their parents to please the demon Bhughul.

This film started off pretty all right with the chase and wonder what Courtney is really running away from.  The second part of the story with people looking into the hauntings and tracking down all the old buildings of the sinister cult. The problem with this is he looks like the dude from The Office and it really was not very exciting. The best part of the film was the actress Shannyn Sossamon as she held the film and her character was interesting but the rest of the characters were assholes that you wanted to die, lacking or over the top CGI (the kids of the cult were done bad).

This film gives us more details on the sinister cult, video tapes, burnings, a real stupid rat scene with some blood, bad CGI kids and house fire, the classic Bhughul and some electrical burning. This film lacked on scares and wasted time on stupid cheap CGI.

Rating:  The first film was a classic for this age of horror but this sequel was disappointing, If you do not have money to do good special effects than you do not have enough money to do a film. I am extremely tired of lazy CGI that looks cheap and shitty. Thank god, for Shannyn Sossamon saving this film, if I did not know better I would think it was a Children of the Corn film.

Storyline: Voicemails start to show up from people’s future selves, which details their own deaths. 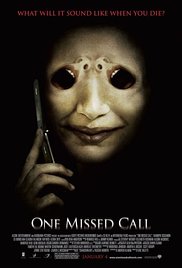 Review (Spoils): Remake time again, man horror has to be the worse for this. A young woman gets a voicemail detailing the date and time she will die and it does happen. A friend of hers starts to investigate the accident with the girl’s boyfriend. We learn that he got a call also and then meets his death. The detective for the investigations sister was the first victim and they try to tie the killer to her and a name of woman Marie Layton. What is with Marie Layton that is causing this on going voicemail curse?

Bring out the jump scares of clichés. We have lots of phone calls, flip phones, bad acting, poor storyline, creepy music and oh possessed cell phones. This film is lacking in much as it does not make much sense. The jump scenes are too common and you can sense them by the music so the scares are lacking and the whole ghost through the phone is just lame. We have some ghouls, ghosts and some similarities to the Final Destination series.

Rating: Go to the original film please, stay away from this one unless you want to see Shannyn Sossamon on the screen only. This film is full of holes, lack of a solid plot and somehow the device is tied to a long time curse. So stay away from your voice mailbox and you will live. Unless you are a cat then you will die for no reason except your owner is a idiot.