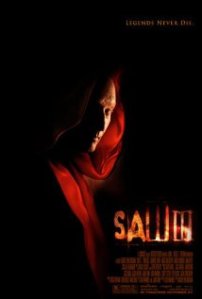 Review (Spoils): Amanda (Shawnee Smith) is back and this time she has a Dr. Lynn Denlon (Bahar Soomekh) under wraps and places an explosive around her neck that is connected to John Kramer’s (Tobin Bell) life support. She must save John from the cancer in his brain. Jigsaw is back to his games even though Detective Matthews (Donnie Wahlberg ) escapes. In this new twist of the game we have a young man who is trapped in it because of his inner anger over his loss of his child during an accident.

This time in Jigsaws fun games we have rib cages, freezing water, dead pigs, shotgun shots, explosions and throat slits. The gore is in the house for this part of the series and the games are wilder and tighter than before.

Rating: This is one of the last of the SAW series before it starts to become dry and stall. We have Kramer on his deathbed and Amanda doing everything she can to save his life. The movie is worth checking out and there are some nasty scenes such as the rib cage bit. The series should have died out after this one but Hollywood took over and wanted more cash under the name.

Storyline: Jigsaw is back and laid traps in a shelter to punish those that have taken life for granted. 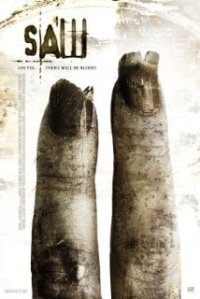 Review (Spoils): Detective Eric Mathews (Donnie Wahlberg) son gets kidnapped by the notorious Jigsaw (Tobin Bell) and starts to lay traps within a shelter in which he comes across multiple people being punished for wasting their so called lives. Time is wasting and counting…..

The film leads into an intro of a man who has a bear trap around his head and must get the key that is located behind his right eye in time to stop the clock. Jigsaw is back and just as nasty as the first time. Detective Eric Mathews has been connected to the Jigsaw murders and the madman thinks it’s time to play with him. We learn that Jigsaw himself is dying from a rapidly-advancing brain cancer and he is punishing all that waste and take advantage of life. When five people wake up in a shelter once again setup for the game (including the return of the survivor in the first film Amanda Young (Shawnee Smith)) they get placed in their paces.

We have the classic bear trap, stabs in the eye, nasty burnings, poison, neck slicing, throat slashing and the classic pig mask. Jigsaw plays out the game in full fold and introduces his first protégé and the connection between them and detective.

Rating: Not as great as the first of the series this one is still not bad. The game all made sense in the end and I love the introduction of the Amanda back into the series. Sometimes it can be confusing with the back and forth but overall this film is still pretty nasty.

Storyline:  Two men wake up in a dirty bathroom and are chained at the ankles. No idea on how they got there they are tormented by a stranger character known only as the Jigsaw Killer. Police try to solve the mystery and learn that they are not the first two victims.

Review (Spoils):  When I first watch this film I was shocked and locked on the film so bad I even skipped going to the bar. This film is just that good. We great character build in this film and works on you turning away from the film as it sits so realistic that it could really happen. Sure it has the police type feel when they are trying to figure where and who is the Jigsaw Killer. But the idea of the puzzles and timer for each victim to choose and survive is out there and possible that it attacks the mind.  We have everything from traps, bear trap helmets, gorging someone to find a key for a lock and it goes on and on. It really is not over the top gore and not really torture as it is all about survival. This film lives off you being on the edge of your seat and sweating while watching someone escape a puzzle trap while the timer is running. This is brilliant and it is the best of the whole Saw series.

Rating:  Creating one of the most unique horror villains in a long time this movie holds.  Forget the lameness of the teeny bop horrors of that era and reach for this one. Yes it might not be for everyone but everyone should see this film at least once as it is a gem in the horror genre. Drink to the Jigsaw Killer as he “wants to play a game”.