Storyline: The Doctor Jekyll and Mr. Hyde storyline but with a twist.

Review (Spoils): Doctor Henry Jekyll (Paul Massie) is a boring man as he is stuck in his lab all day working with monkeys and mute children trying to study the workings of the mind. He is so occupied that he is ignoring his wife’s (Dawn Addams)needs and she is fooling around with his best friend Paul Allen (Christopher Lee). This leads to madness when the doctor starts to experiment on himself after being rejected by his wife. The difference is in this tale is he becomes a more cleaner looking gentleman but a madman inside.

This is a total different twist then the other versions of have seen so far with the Dr. Jekyll and Mr. Hyde storyline. At beginning of the film I was wondering what the hell was going on with Paul Massie and his voice but once the film kicked into gear I was surprised and locked on this film. The acting is well done and to be honest Christopher Lee stole the show. He is the clean cut friend who is screwing Jekylls wife and using his money. Dawn Addams plays the part of the not so nice wife who is only out for herself in her own way but in love Paul.

This film gives us the basic Hammer Film treatment of bosom women, stockings, a longer then it needed to be dance show, some snake charming ladies oh and some red blood and a nice blow to head (poor Oliver Reed)

Rating: This film is great! It actually might be up there as one of favorite Hammer Films as the story keeps you glued to the screen and the ending is very well done and the conclusion is shocking (remind me of The Fly for some reason). If you have not seen this film and a fan of the Hammer Films you need to check this one out.

Storyline:  The tomb of Princess Ananka has been invaded and since a mummy is stalking the ones involved. 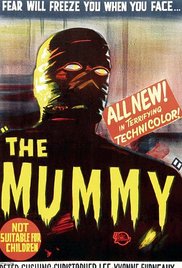 Review (Spoils):  A bunch of archaeologists discover a hidden untouched tomb (not sure how they could of missed yet) of the late Princess Ananka (Yvonne Furneaux). When they enter the tomb they get cursed by an Egyptian local and her lost high priest (Christopher Lee) who is now a mummy comes back to life to haunt and terrorize those people that entered the tomb.  3 years later the relics of the tomb get transferred to England and so does the mummy and he continues his terror upon the ones that despoiled the ancient tomb.

This film is messed up in storyline, we start with what is happening in Egypt, then scroll over to England and then have 20min of a flash back before the time in Egypt and then once again thrown into the present. Peter Cushing is playing the part of the son even though he is 100 years old. Christopher Lee plays the high priest and the mummy which is not bad. The make-up is actually well done and I like the way the monster moves but the plot and story is pretty weak.

Rating: I usually enjoy a good Hammer Horror film but this one seemed weak. Christopher Lee was good as the monster but the rest of cast did not cut it for me. Even Yvonne Furneaux seemed lacking for a Hammer film which normally the leading ladies are all over the script. It just felt to setup and forced to be entertaining.

Storyline:  A madman scientist brings back the soul of his assistant into the body of a woman 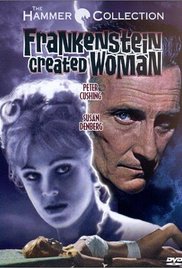 Review (Spoils): Baron Frankenstein (Peter Cushing ) plays with the object of death and he and Dr. Hertz (Thorley Walters )have a plan to bring someone back to life as they have found a way to trap ones soul. When the young man Hans (Robert Morris) is framed for murder and put to the death they use his soul and place it into a body of young woman found dead in the river. What is not known is that young Hans and the woman known as Christina (Susan Denberg) were secret lovers.  When she is brought back to live she goes on a rampage of revenge.

Another Hammer film for the review and as usual we have Peter Cushing, heaving bosoms, red blood, kills off scene and amazing scenery. The story is actually well written and we have a few plots at play here in this storyline. Some bright red blood, hatchets and nice bloody head makes this film very enjoyable.

Rating: I personally actual liked this film a lot. It was a fun film and it had some funny moments and some creepy moments. Susan Denberg was great and I love how she played both the victim and the monster. This film would be great drinking film if you drank every time someone had a glass of wine.

Review (Spoils): Duc de Richleau (Christopher Lee) and Rex Van Ryn (Leon Greene) get invited to a mansion for a party. When at the party they stumble across a pentagram on the floor and some chickens in a box. We learn that the inviter Nicholas is proficient in black magic. We learn that the guests get escorted out as the members are having a private meeting (hmmm wonder what this about). Anyways the whole rouse is controlled by a Mocata (Charles Gray) who is trying to resurrect the devil.

We have lots of camera focus on eyes, a dude with some crazy white eyes, a crossed eyed old lady, some smoke, some goats and chickens, cross throwing and of course a great costume of the great devil himself. Basically it is duel of Duc de Richleau against the cult but man the devil costume rocked! Acting was well done both by Christopher Lee and Charles Gray.

Rating: This is a classic horror film and it has a Hammer feel to it. When have clips of the devil on the rock in an Iron Maiden video you know you did something right. The movie can have some slow parts but you can see where some of the ideas of Rosemary’s Baby came from or vice versa as it was the same year. Grab some beers, raise your horns and drink to the hairy goat devil!!!!!

Storyline: A young boy was born on Christmas day from a mute servant who was raped by a beggar. Now he is cursed by god with lycanthropy. 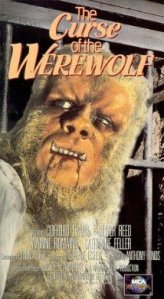 Review:  Leon (Oliver Reed) was born on Christmas day; his mother (Yvonne Romain) was a mute servant who was raped by a beggar. This brought on the curse of lycanthropy which his adopted parents and he tries to hide from society. He grows up to become a handsome man but is haunted by nightmare at night (full moon) due to his disease. Supposedly only love will lift the curse. While in his travels he comes across working for a wine cellar and falls in love with his daughter Cristina (Catherine Feller). But every full moon he turns and brings terror to the villages.

This is one of the great Hammer films that lie outside of the Dracula series. The film relives on the internal battle of the young man and the beast. He wants to be normal and live a normal life but the curse keeps him with drawled from the rest of society. The makeup is very well done and he is one of the most notable of the werewolves in horror outside of the Wolfman himself.  The story does become long before get to the curse as a quarter of the film is on the life of his mother and her torment.  They should have swapped the leading ladies around as Yvonne Romain is beautiful and Catherine Feller just does not fit the part. Other than that this is a great film.

Rating:  I’m a Hammer fan and I find this film rates as one of their better films. The storyline is filled and the acting is pretty decent. Oliver Reed and Yvonne Romain are both enjoyable to watch and the werewolf itself was well done. The only complaint would be the bright red blood they should have toned that down a bit.

Storyline: Two couples get stranded and a mysterious horse and coach picks them up. The coach arrives to Count Dracula’s castle where his loyal servant Klove hopes to resurrect the prince of darkness.

Review (spoils): Leading as a sequel to Hammer Films Horror of Dracula we have this fine gem. Two young couples get stranded in the gothic land near Count Dracula’s castle and his mad loyal servant Klove (Philip Latham) brings them to the castle as guests. Klove kills one of the gentleman and hangs him over the vampire’s coffin and slits his throat and the blood resurrects Dracula (Christopher Lee) once again. We have great acting and lots of red blood in this one. Dracula has no real lines in this film but he still at his greatness that Christopher Lee can do. We have throats slits, bites, stakes, fly eating and even the death of Dracula as they play the history of the free of running water (he dies in a collapse into the water underneath the castle). The Kolve character alone in this film is great as he plays the madman who wants the prince of darkness to rise again!

Rating: I would have to say this film is a good if not better than Horror of Dracula. The storyline is strong and yet again this is one of Hammer’s best.

Storyline:  Dr. Frankenstein recalls the tale of the creation of the monster.

Review (Spoils): Hammer is back on my horror list and this time we have Peter Cushing playing Dr. Frankenstein and Christopher Lee playing the monster.  The storyline is pretty much the same as we have a young Frankenstein trying to create life but this time not using lightning but using a liquid formula. We have Hazel Court playing the voluptuous redhead that loves the doctor and tries her hardest to have his full attention instead of dealing with secret experiments.  The acting in the film is very well done and the storyline is not that far off from the Universal one but the monster make-up for Christopher Lee is semi poor and that really takes away from the film.  I know Hammer tried to do something unique but I just cannot get past the bluish rubber skin and the seam located along the neckline.  This looks a little too amateur for Hammer films and there just was not enough meat in the film keep myself on my toes.

Rating:  Not a bad movie but I have seen better Hammer films. I was excited to check this out but was let down on how bad the makeup was done in this film. Peter Cushing did an amazing job playing the doctor but there just was not enough going on to keep my interest like other Hammer films.