Storyline: Mike is realised from the mental hospital but he is till bound to stop the Tall Man.

Review (Spoils): Mike (James Le Gros) is back after he finally tells the doctors that none of the experiences in the first movie happened. Once out he runs to old friend Reggie (Reggie Bannister) and the wok together to hunt down the Tall Man (Angus Scrimm). During this a young woman named Liz (Paula Irvine) is having nightmares of the Tall Man and creates a bond with Mike. During the hunt for the Tall Man Liz and her family are being haunted and tormented by the Tall Man and his short lurkers.

This film plays right after the first one and we have the Tall Man back, the lurkers, Reggie and his cool hair, the flying spheres and more out of the planet fun! We have a lot of the same kicks as the first film and even an ode to the classic ending.

Rating: The whole Phantasm series is just weird so do not expect anything different with this one. Sure the dream sequences are not over whelming like the first one and we still have the small jawa like lurkers and Angus Scrimm yet again plays the Tall Man. Grab some cold ones and sit back and watch this one back to back with the first one.

Storyline:  Brothers investigate strangeness that is revolving around the town funeral home. They find out it is owned by a caretaker known as The Tall Man who is using the bodies as slaves for another world. 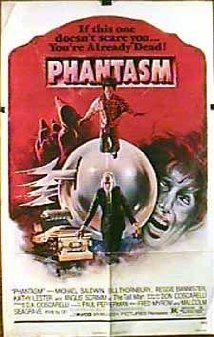 Review (Spoils):  Tommy gets stabbed in the graveyard by a blonde but it gets passed off as suicide.  Two brother’s Jody (Bill Thornbury) and Michael (A.Michael Baldwin) and friend Reggie (Reggie Bannister) bury their friend but Mike noticed something strange while snooping after the funeral. The caretaker (Angus Scrimm ) picked the coffin up with one hand and put it back in the car and did not bury Tommy.  This leads to more snooping around the funeral home and in which they come face to face with The Tall Man (the caretaker), flying metal balls, midgets that look like jawas from Star Wars (really are the corpses shrunk to be slaves) and a portal to another plane. This movie flows in the horror vein with a big touch of sci-fi. The movie is cult classic if you can keep up with the dreams and the storyline.  The Mike character can really annoying but Reggie is just damn cool he rocks the bald man ponytail and can jam on the guitar.

The music in the film is also a highlight as it has a very Goblin like feel like the Old Italian zombie films of the 70s-80s eras. The music alone helped with the film.

Rating:  This film is a cult classic and a horror classic but it is not for everyone. It has a lot of dream sequences and sci-fi feel more than horror but it falls under the same. This is the first of the series and more gets explained later on in the series.  All hail to the Red Planet!